Almost all of these cars still in existence today have bad or missing felt T-Top seals and many owners really don’t know what to do about getting them replaced. This job is fairly simple, will require a small investment in new parts and materials and about 3 to 4 hours of your time. My T-Top seals were showing their age and since most of all the other work on my car was finished, I decided to do a little detective work and see if I could root out some replacement seals.

Here is some history and what I found:

In 1983 the original seals (the cloth/felt part) in my 1978 Magnum were bad and I took the car back to the dealer to get them replaced. The dealer referred me to Wisco (an American Sunroof Company). I made an appointment and took the car to their place in Ferndale, Michigan. They replaced both seals for $88.74 and it took them about 2 hours. Sure wish I could get that done today!!

I tried to call Wisco and immediately hit a dead end, I think they are out of business.

Did a little searching and found my old receipt for the seal replacement done by Wisco in 1983. The part numbers for the seals were listed on the invoice, these seals are referred to as 7.9 seals and the ASC part number is G-24X1-0051-BEXX. I did a search on Yahoo and found a place in Illinois that had that number listed. Called them and as luck would have it I hit another dead end, the seals were no longer available.

More searching found the phone number for American Sunroof (ASC). I called them and they referred me to another company called Kelly’s. I called Kelly’s and talked to Jake, I told him what I wanted and he referred me back to ASC. I then called Pete at ASC and talked with him, he was involved with the Mopar T-Tops back in the 70s. Here is the deal; The 7.9 T-Top Mopar seals are no longer available and nobody is making reproductions. However, 6.8 T-Top seals that were used on the Ford Mustangs from the late 70s are available from Kelly’s. After talking with both Pete from ASC and Jake from Kelly’s I felt comfortable that the Mustang felt seals would work. According to both guys the 6.8 seal is a slightly smaller seal and they felt the 6.8 seals “should work just fine”, the seals just won’t have the same “compression” as the 7.9 seals. I placed an order for a set, they were $38.50 per side plus shipping.

A few days later the seals arrived. The new 6.8 seals look very close to the originals, are plenty long enough and as I suspected the only difference I could see between the new seals and the originals is that the tubing inside the felt material is a little smaller, I felt even better that they would work fine.

It’s off to the auto parts store to get some adhesive remover and 3M weatherstrip adhesive (super stuff).

Seals and installation are fairly simple. Removal of the old adhesive is a bit tedious. Be CAREFUL when removing your old seals so you don’t bend any of the aluminum trim when pulling off the old parts. Once you get into this you can see there was not a whole lot of thought put into this seal system. They are just basically glued into place and the ends are tucked into holes in the trim pieces at each end.

The only other tricky part will be finishing the ends. Some careful trimming and tucking into existing trim will do the trick.

These seals have metal tape sewn inside to give them some rigidity. When going around a curve you can put cuts in the bottom to form the seal to the curve. This is the way my replacements were installed by Wisco.

Finally, you will want a vacuum with a wand to clean out pieces of residue that fall in the channel after the job is done.

1. Remove the glass panel and lay down some plastic sheeting to cover the entire interior, you don’t want solvents or adhesives dripping down on your seats, carpeting, or dash. I found it best to work on one side at a time.

2. Start by removing the old felt seals, these seals were only held in by glue from the factory and it looked to me like they used an adhesive similar to contact cement. When pulling out the originals be very careful not to bend any of the trim pieces! Just start at one end and pull the seal out. Note: Before you remove your old seals look at the way the ends are terminated into the trim pieces.

3. Now it’s time to remove the old adhesive. I sniffed the adhesive release solvent they had at the auto parts store and it smelled just like lacquer thinner so I just used the stuff I had in my garage. This part is what will take the most time, don’t rush it!

4. Liberally apply the remover to the old adhesive stuck on the aluminum trim pieces using an acid brush and let it soak for a while. The solvent will soften up the old adhesive so it can be easily removed. I applied it every 2 or 3 minutes for about 20 minutes. It softens up the old stuff pretty good. If you don’t work at this the old glue will harden up again after the solvent evaporates. Start gently scraping, preferably with a plastic scraper. Just keep working at it until you get it off. Once you have removed most of the old adhesive use a dry rag to rub off remaining residue. Be careful here not to get any solvent/remover on painted or interior surfaces. It shouldn’t hurt paint that has been there for a while but the remover will soften any new paint. Make sure you use a plastic knife or scraper, a metal one can damage the trim pieces or painted surfaces.

5. Once everything is dry you should test fit the new felt seal. Mine were about 10 inches longer than what I needed. Leave about 3 to 4 inches of excess felt seal extending out from the T-Top edges. This will have to be trimmed later and tucked into a small hole in the trim to finish the job.

6. The 3M weather-strip adhesive cement is like contact cement. You apply it to both surfaces, wait for it to get tacky and stick everything in place. I worked this in sections so I wouldn’t get glue on anything else like the seats!! Just start at one end and work your way around. I used the top surface of the roof trim as an alignment guide. The new seals are stiff and bendable with the aluminum tape used for a foundation. Use adhesive on both the trim piece surface and the seal surface. Then just work slowly and work the seal around the curves in the trim pieces. Take your time!! After the felt seal is glued in place insert your glass panel to hold everything in place while the adhesive cures. See picture below. 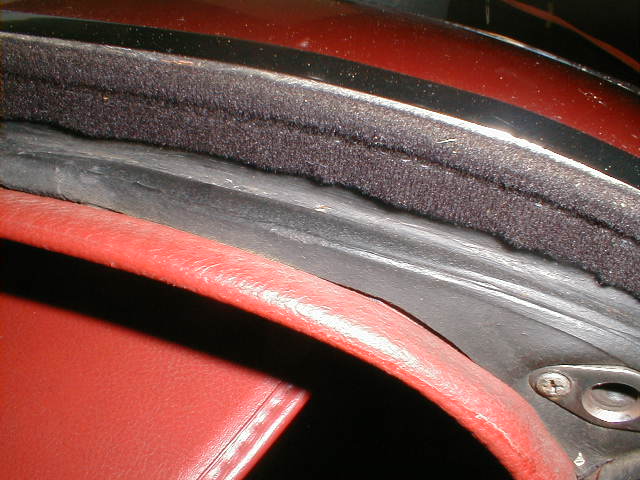 7. All that is left is to trim the ends and tuck the material into the trim openings. If possible, let the adhesive cure for a while. I left the T-Top panel in place for a couple of hours before I started this step. The ends are just tucked into openings in the trim. On the front it is tucked into the trim piece end opening. In the back there is a hole in the trim piece that you have to tuck the seal into. I started by cutting off the excess leaving about 2 inches. I then removed the thread/stitching from the two seams and cut just the tube (not the material or aluminum tape) at the edge of the t-top panel in the roof so it doesn’t hang down. I put the felt material back around the metal tape and folded it in a fashion so it would fit into the trim openings the old seals were in. You will need to cut the material and tape so it fits, you won’t be able to tuck a whole lot of the material into the opening. This last step is trial and error as you will have to trim and try fitting the ends of the felt seal in the trim piece openings until it fits properly. Once you finish one side the other will be much easier. See pictures below to see how I did it. 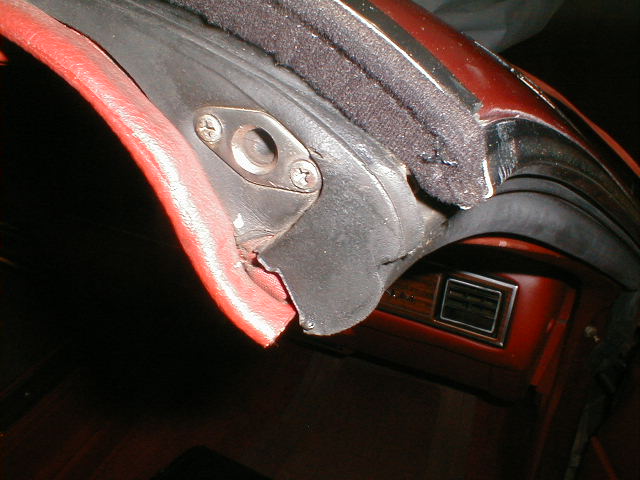 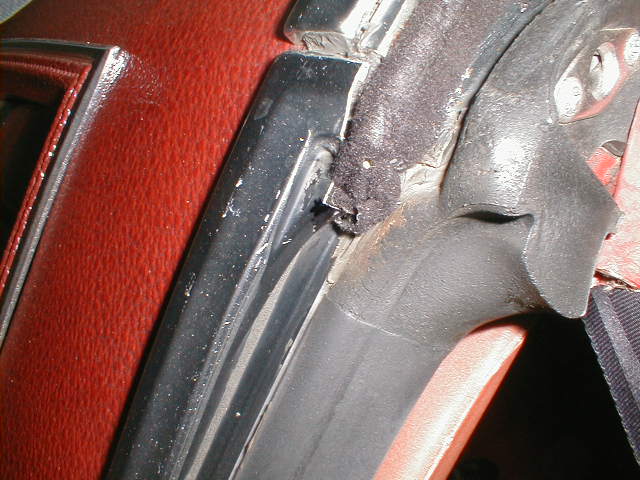 Update 5/7/20: I believe Kelly’s is no longer in Business, and I’m still not finding anyone making these seals.

Total for parts and shipping to Michigan was $85.18

The seals for the Cordoba/Magnum consist of a flexible tube similar to surgical tubing and aluminum tape about 3/4″ wide wrapped with a felt material. One of the big differences between these seals and the originals is that the newer ones are stitched with 2 seams. This stitching forces the rubber tube to the top of the seal. My original seals allowed the tube to float around. Another thing I noticed about the new seals is that the wall thickness of the tube used has much thicker walls. So, even though it is slightly smaller in diameter than the originals it is more resistant to being squashed. The glass panels fit nice and snug!

Since these seals are glued in place and no trim needs to be removed, I don’t think there should be any rattling issues. Took my car down the road after the new seals were installed and was pleased to find it much quieter than before. No wind leaks. Even pushed her to 80 mph for the wind noise skeptics, still no wind leaks, whistles and no rattles.

Overall, I’m pleased with the way they function and look. My old seals were tired and the passenger side was starting to tear in places and likely would not have survived the summer.

Just remember the 3 rules….. Patience, Patience, and Patience. It’s worth the effort!!

See picture below of the finished product. 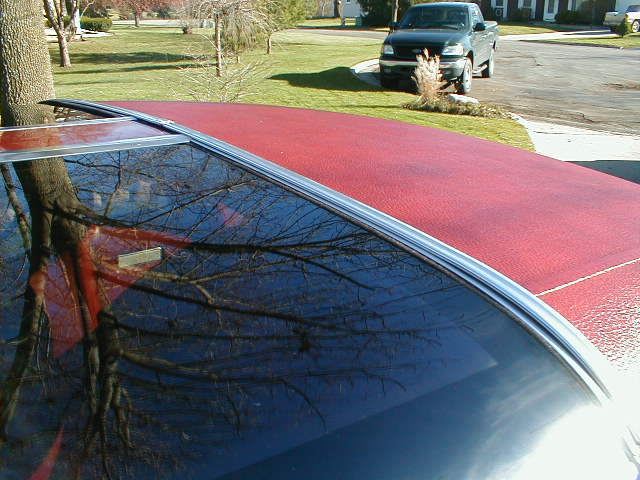